The Caribbean Roatan island is located 35 miles off the coast of Honduras and is located on the 340 mile long Mesoamerican Reef, the second longest barrier reef in the world. Roatan is roughly 40 miles long and is the largest of the Bay Islands of Honduras which also include Utila, Guanaja, and Cayos Cochinos. It offers its visitors Caribbean white sand beaches, lush tropical forests, a vibrant coral reef teaming with marine life, and a host of activities to enjoy including world class snorkeling and PADI SCUBA diving.

Once only known to avid SCUBA divers as a world class diving destination, Roatan is quickly becoming a praised vacation destination as well. This hidden jewel of the Caribbean is not as overdeveloped, over exploited, or expensive as other islands such as Cozumel, the Caymans, or Jamaica. In addition to the constant write-ups and rave reviews in Diving publications like SCUBA Diving Magazine and Sport Diver Magazine, it has also received much praise from international travel publications.

The two most popular spots for vacationers on Roatan are West End and West Bay.

West End is more of a beach town that has a mix of hotels, restaurants, dive shops, gift shops, and houses. There are ex-pats, tourists, and locals that all hang out at the same places. The town is pretty much a main road that follows along the beach. The best beach in West End is Half Moon Bay with beautiful white sand with clear Caribbean blue water. It is  also much quieter and less touristy than West Bay. There are more restaurants and nightlife options as well. There are about 30 restaurants ranging from cheap street food to Thai to Italian to Argentinean plus cute little palapa bars that have live music. Most of the hotels, property rentals, and houses are set back from the beach and nightlife areas 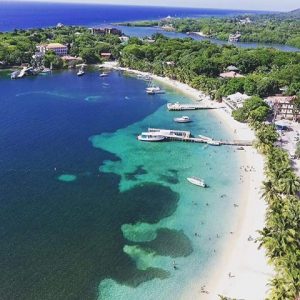 West Bay is the best beach on the island and routinely ranked as one of the best beaches in the Caribbean. But because of this, it is more of a resort area. It is more expensive than West End (accommodation, diving, drinks, food, etc) and can be difficult to get to and from in the evening.It has larger hotels and resorts though there are a few independent restaurants.  The food tends to be overpriced and  typical US offerings like burgers, wings, chicken tenders, pasta, plus some local things like coconut shrimp and whole friend fish. Many of the hotels have some kind of entertainment every night that you can go to. On cruise ship days( Monday – Friday), the beach can get incredibly busy. But even with the people, it is still beautiful. I recommend going on non cruise ship days or in the afternoons once the cruise ships have left.